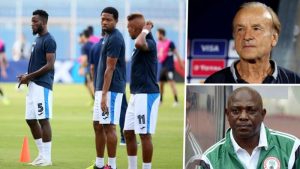 Gernot Rohr has come under fire for not reckoning with NPFL stars, but the thrashing of the People’s Elephant in CAFCC proves he is right to be aloof

One of the running battles Super Eagles coach Gernot Rohr has had to fight over the course of his tenure concerns his apparent indifference toward players in the Nigeria Professional Football League.

Quizzed on it, his frequent refrain has been to the effect that, before attempting to dislodge their foreign-based counterparts, they should first endeavour to stand out on a continental stage: be that the Africa Nations Championships or Caf’s club competitions.

It is not a rationalization that is fool-proof, of course, but it is rooted in a semblance of logic.