“Chioma Is Busy Cooking For Davido And His Friends, While He’s Busy Begging His Ex” – Blogger Claims 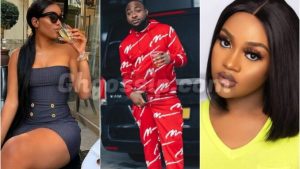 An Instagram blogger identified as Cutie Julls has made serious allegations about the Nigerian artist and songwriter Davido.

According to the Instagram blogger, Davido has no plans of settling down with Chioma after his “Assurance” relationship. She explained that the singer is currently begging his Congolese ex-girlfriend who lives in South Africa for a comeback after he realized the lady identified as Davina is now a doctor.

The blogger further stated that Davido has limited Chioma to the kitchen because she only cooks for the artist and his friends anytime she visits his Banana Island mansion.