Girl Receives Beatings From Her Boyfriend And His Friends For Cheating 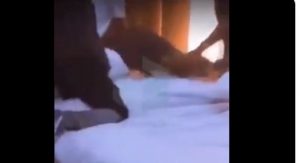 OVERVIEW OF: Girl Receives Beatings From Her Boyfriend And His Friends For Cheating

A young lady has received severe beatings from his boyfriend and his friends after she was allegedly caught cheating on her guy.

This is true from a viral video that has just surfaced online on social media.

The viral video sighted by OccupyGh.com captures the exact moment the young lady believed to be Nigerian is lashed by her boyfriend and his friends.

It is alleged that she was caned of allegedly cheating on his boyfriend.

She cried out in the video and yet, the irate boys continue to beat her to stupor.

They poured water on her back to enhance the beatings while they delivered it on her poor back.

WATCH THE VIDEO BELOW;

She allegedly cheated and was beaten to stupor by her boyfriend and his friends. ? isn’t this a crime? pic.twitter.com/CDjcA5QRyy