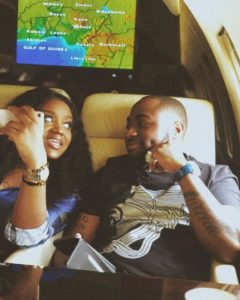 Davido has a unique way of displaying affection for his fiancee, Chioma in public and it comes right on time whenever his fans need a topic to gossip about.

The singer a few hours ago took to his Instagram page to excitedly show off an art piece that Chioma specially painted for him.

The painting titled “Lion King” sees Davido standing in a deserted forest. Fans marveled by Chioma’s talent praised her for painting such a beautiful masterpiece. A fan then told the singer to bless her with his “cucumber” for giving him such a wonderful gift. “Go give her the cucumber already” Davido gladly responded saying hat he already gave her his own gift in the shower. “gave her in the shower already”